Fears of a Black Protester

We yelled at Willow Boulevard, frontlines, three of hundreds
I was there with my friends, one Asian, the other one White, me Black
Our placards up, mine said: No One is Free Until Black People are Free
The police were there, clad in blue uniforms, armed with guns
Protected by the government and skin the color of corn flour
Made a wall with their bodies, faces looking like rocks
Impervious to our cries for justice

His life mattered! It mattered!
No justice, no peace!
We will not rest!
Yes!

Amid the chants, peaceful as a protest can be
The police, unyielding, sure in their resolve
A scream rang out, then two, then many; a store had been set on fire
The feet of protesters quickened as the police dropped shields
I looked around and my friend, Vidya, was gone
I grabbed my White friend’s hand and we ran too
Screams coated the thick, smoke-filled air

Defund the police! Abolish the police!
No justice, no peace!
Stop killing us!
Yes!

Behind us, people were possessed with the spirit of revolution
The blue monsters threw tear-gas into the crowd and forced people to their knees
Ashleigh and I ran forward, trying to disappear before we were even seen
I did not run because allies ran
I ran because I was aware of the color of my skin
Brown skin, in my world, was deadlier than rubber bullets
And then we were stopped by a big blue-coated body

A riot is the language of the oppressor!
No justice, no peace!
We will not be silenced!
Yes!

He asked me where I was going
‘Home,’ I answered, my body lowering as he pushed my head down
‘And her, where are you taking her?’ he said, pulling Ash to his side
‘Home; she is my friend’
He asked if I drugged her and dragged her to the Willow protests
‘No,’ I answered, ‘she is an ally’
He did not ask Ash for confirmation before he shot me

Stop! What are you doing?!
She has done nothing wrong!
We were being peaceful!
No!

Out of my left eye, I saw the officer warn Ash to stay back
Like I was a plague he was protecting her from
My other eye was closed, the gash above my eyebrow pouring blood into it
All energy drained out of me when the officer pulled me up
He folded my arms behind me and cuffed my hands
When my legs failed to work, he dragged me away
Ironic how those who cry loudest for freedom end up in an iron-barred box

Stop doing this! Be instruments of change!
No!
Black lives matter!
Yes! 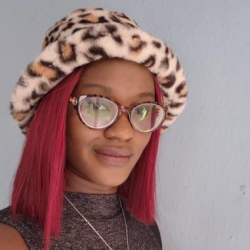 Althea Storm
Althea Storm is a writer and poet born and raised in the heart of Lagos City, Nigeria. Althea considers her family most important to her. Her hobbies include coding, playing Scrabble Go, and blowing rainbow-coloured bubbles. If she isn't spending time with her friends and family, you can almost always find her with a James Patterson thriller in hand.