Some Kind of Warrior

I’m knifing December water,
conjuring up my Viking ancestors
as my heart goes under. Anyone
could do it, though. We’ve all got
some kind of warrior, even the passerby
shivering on my behalf.

“What are you doing in there?
They don’t heat that, you know.”
The whisper of worry evaporates
from her SoCal smile when I tell
her I’m from Minnesota. Northern
California has nothing on the North
Sea, or the North Shore.

I’m a Standard American, English
to match, except I’m talking to my
mom, slipping into “melk” and
“Wanna come with?” It’s not
Fargo, but I’m on the road there,
my words and DNA a Viking
excavation on the way. I imagine
their courage, to plunge into the
pool, but what they’ve pillaged
I’ll never quite know.

I’m eight percent stolen, British
and Baltic, zero of those names
on my family tree. It’s timeworn
women who are forced to show up,
oceans and centuries from home,
gone except a snippet of genome,
a few lines in a poem. 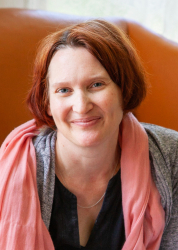 Naomi Dean
Naomi Dean grew up on a farm in Minnesota, USA. She has taught English and Spanish in Brooklyn, New York, and Palo Alto, California. She currently teaches ESL at an elementary school in the Twin Cities, where she lives with her husband, son, and daughter. Naomi has recently resumed writing and submitting poetry after several years of focusing on parenting and teaching.